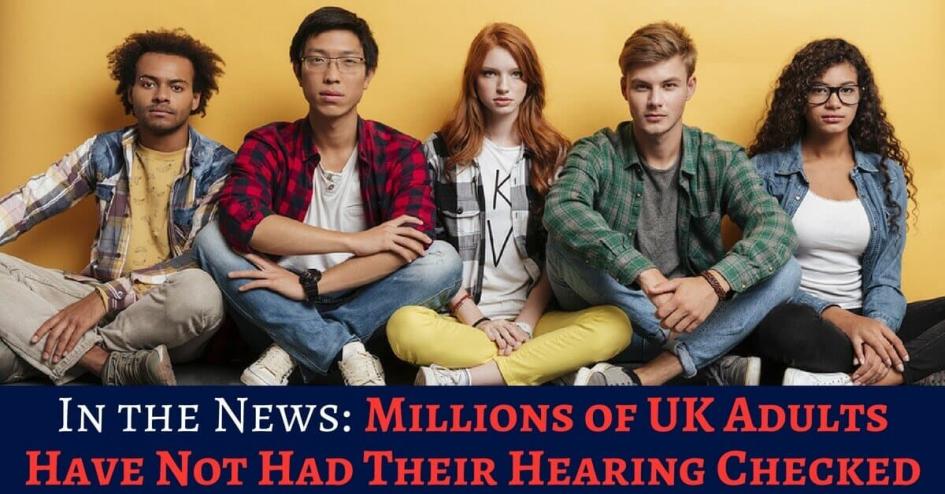 Millions of UK adults have never had their hearing checked

Jan 26, 2018
Do you have hearing loss and don’t know it yet? Three quarters of UK adults admit that they have not yet had their hearing checked by an audiologist, according to a survey by Oticon.

Surveying 200 adults in the UK, researchers found possible causes for hearing loss. Our smartphone culture has led to almost half of UK adults listening to music at a high volume on their headphones, with over a quarter doing this on a regular basis.  One in five people said that they didn’t use hearing protection in loud environments. This comes at a time of a recent explosion in outdoor events in the UK such as music festivals, where noise levels routinely exceed safe levels. Predictably, the research has revealed that this continued exposure has led to perceive hearing loss. 51% say they often find it difficult to hear what other are saying to them, and 41% usually have to ask people to speak louder. Two-fifths have to increase the volume when on the phone. The response to perceived hearing loss on people can often be more emotional, as revealed in the survey. Respondents reported avoiding social situations, finding it difficult to concentrate and feeling stressed when they are unable to hear in noisy environments. 33% were also worried that their hearing was declining as they aged.

Official statistics point to 11 million people with hearing loss across the UK. That’s around one in six of us. But these are only those who have reported to a healthcare professional. What about the three quarters who have never had a hearing test? The 11 million UK citizens cited could be the tip of the iceberg. People who first discover a problem with their hearing wait on average 10 years before seeking professional help.  What is stopping people from getting themselves tested for hearing loss? Many sufferers still feel there is a social stigma attached to hearing loss. Getting your hearing tested is seen as an acknowledgement that your body might be on the decline, and that’s hard to take for a lot of people. This is what happened to Shari Eberts, who admits that she denied her hearing loss “for many years. I went out of my way to avoid talking about it, treating it and never asked for help in difficult hearing situations. This denial led to embarrassment, social isolation and difficulties at work, but I continued to shy away from dealing with my hearing loss,” But this stigma is often in the eye of the beholder, related to feelings of self-image rather than based on what society thinks. Many professionals within the world of audiology believe that there is less stigma now compared to 40 years ago.

A lack of interest in getting tested could also be due to the reputation of hearing aids themselves as being unhip and unsophisticated. In the past, this was partly justified. There was no digital signal processing, noise reduction, feedback limitation systems, wireless Bluetooth streaming or personal FM systems. They were basically portable microphones designed to amplify speech around you. That’s why users had to keep adjusting the level of the microphones constantly in noisy situations, which made them all the more conspicuous. They would even have to remove it altogether due to occasional feedback. And they looked uncool. But thanks to improvements in hearing aid technology, today’s hearing aids are discreet, responsive and technologically advanced. They are basically mini-computers for your ears that can analyse your environment and process the sound to account for any sound situation you might find yourself in. Almost all now support wireless streaming to your mobile phones and smart TVs. Noisy environments are now much easier to handle as most devices now adjust their settings to suit the environment of the wearer. RIC technology has shrunk the size of the average modern hearing aid, which means they aren’t as clunky as their reputation suggests.

If you are one of these people, what to do.

Are you concerned that you might have significant hearing loss? Luckily, our team at House of Hearing is here to help. Visit is at one of our centres for a consultation and hearing test today.
< >