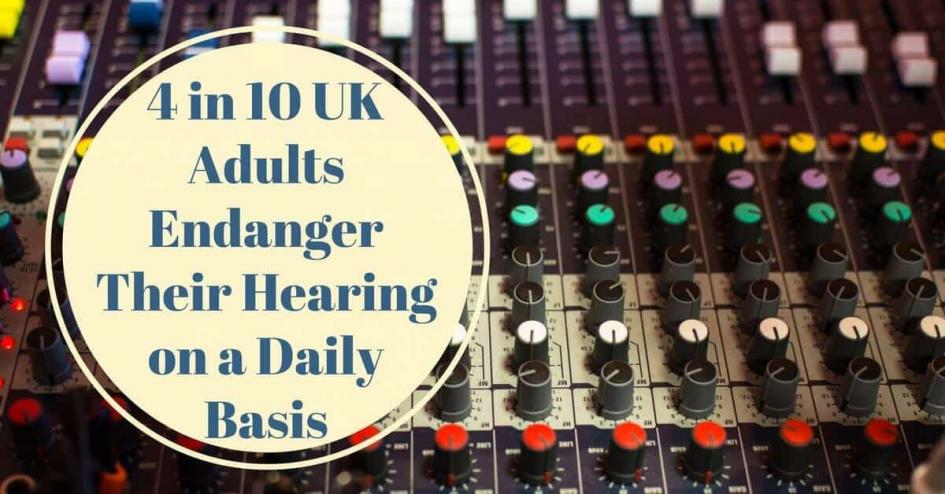 Feb 12, 2018
It was the best show you’ve ever been to. The band was on form and they played all your favourite songs. But what is this ringing in your ear? If this happens to you on a regular basis, then you may be unknowingly endangering your hearing. This is not an uncommon phenomenon. According to a study by Oticon, four in ten UK adults unknowingly endanger their hearing on a daily basis and one third don’t take ANY precautions to protect it when exposed to loud volumes. Many people who go to music concerts are not aware of the potential damage the music is doing to their ears.

The other source of noise induced hearing loss is from something most of us use every day. Using earphones with our smartphones can also damage out hearing if we have the volume too high. And ‘too high’ might be lower than you think. How often have you resolved to raise the volume on your music to drown out the noise the carriages make as they shuttle through the London underground? It seems farfetched, but earphones actually have the capacity to damage your hearing the same way that chainsaws and motorbikes do. As chainsaws and motorbikes create 100dB of sound, a smartphone at 70% volume is 85dB. Listening to your music for an extended period of time can lead to permanent hearing loss. As you might expect, this type of noise induced hearing loss is become more prevalent among teenagers, having increased 30% since the 1990s. So how do you know if the volume in your music is too loud? You know the music is too loud when it is uncomfortable to listen to or you can’t hear sounds from the outside when listening. Audiologists recommend that you not listen to music using earphones for longer than 60 minutes a day or at more than 60% of the maximum volume of your smartphone. Most music apps now come with a volume limit function to help you with this.

Regularly going to loud concerts or listening to music at high volumes is a very common cause of tinnitus. The ringing occurs due to loud noise damaging the fine hair cells in your ear. Continued exposure to sounds over 85dB can cause hearing loss. When you consider that live music is usually around 115db, it becomes a social health concern. And the louder the music, the shorter the time it takes for you to develop noise-induced hearing loss. In another study, researchers found that over half of respondents that suffer from tinnitus also admit to regularly enjoying loud music, with two thirds of these doing so at least once a week. Commissioned by Oticon – creator of Opn, the world’s first internet connected hearing aid, the study of 2000 UK adults found 51% occasionally can’t hear what others are saying to them, and 41% said they had to ask people to repeat themselves or speak louder. People affected by hearing loss are also going out and meeting people less as they are concerned they won’t be able to keep up with the conversation. It is clear from the study that the effects of our smartphone culture and the increase in live music events have damaged hearing of many UK adults. But what is less clear is if those affected are willing to do something about it. 32% of those with hearing loss said they have never thought about getting hearing aids. And 22% of those who have considered them would feel too self-conscious about wearing them.

Hearing aids however have come a long way from the bulky monsters of yesteryear. “Thanks to advances in hearing aid technology, many hearing aids are now small and discreet, fast and dynamic.” According to Thomas Behrens, Head of Audiology at Oticon. He also recommends that people check their hearing at the same time as their eyes: “Hearing can decline slowly over a long period of time which can make it both hard to recognise and easy to ignore – so ideally people would get their hearing checked from time to time, just as they would their eyes.”

Are you concerned about your hearing abilities? Have you recently been exposed to high levels of noise? Our team at House of Hearing is here to help. Visit us at one of our centres for a consultation and hearing test today.
< >