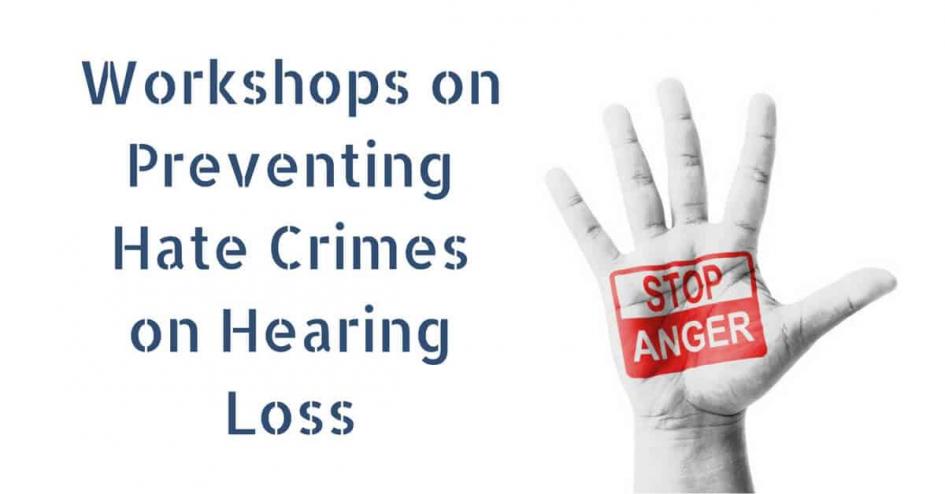 Feb 19, 2018
A charity which supports deaf and hard of hearing people called deafPLUS have organized a workshop which aims to educate people about D/deaf targeted hate crimes. The workshops raise awareness of Deaf Hate Crime among Hard of Hearing individuals and will gather research on experiences of hate crime in the UK. This research will be used by the Home Office to aid them in writing policy with regards to hate crime among the deafened and hard of hearing.  The workshops aim to define and identify hate crime, and how to best respond to it if it should ever happen to you. In the month after the UK voted to leave the EU, hate crime rose. We saw a 20% increase in the months following Brexit, according to the National Police Chiefs council. And the problem isn’t going away. The British Deaf Association (BDA) recently wrote a report in which they interviewed a number of Scottish deaf people to find their experiences of hate crime. Over half surveyed have suffered a hate crime. The majority of those victims have experienced it four times or more in their lives. And half of the participants know someone else who has experienced a hate crime. One specific example of hate crime was highlighted in Channel 4’s airing of a programme called “999 whats your number?’ in July 2016. The show featured a deaf man called Stuart who was victimised for his deafness by his neighbours. He has since moved away from those abusive neighbours. But the abusers were never held to account. As we see in Stuart’s case, many people in this situation also don’t know what constitutes a hate crime, and so merely brush the incidents off thinking there’s nothing they can do – when in fact there is.   What is hate crime? We can define it as a wrongdoing carried out against a person or property that is persuaded by ‘malice or ill-will towards an identifiable social group’'. If you believe you have been targeted because you are deaf or hard of hearing, then it might be considered a hate crime. Those who are vulnerable often suffer from hate incidents in the form of: more seriously however, are hate crimes, which are any one of the following things:   What to do if you have suffered a hate crime If you are a victim of a hate crime, no matter how small or unimportant you think it is, you should inform the police and it will be recorded and taken seriously. This can be done online or through a third-party reporting centre. And reporting is more important than you think. You will receive advice and support which will ensure your safety, individuals who commit the crime will be held to account, your reporting helps build a general sense of the nature of crime in your community, and could help prevent a minor situation developing into a more serious one. Finally, the more people who report these crimes, the bigger the chance that the problem will eventually be eradicated.   Fear of reporting Some people, for different reasons, don’t want to report their crime directly with the police. But now you can report in an indirect way through a third-party reporting centre. It is a protected and safe space for you to report your issue. According to the BDA study, two thirds of the deaf participants did not know about third party reporting centres. Should you want to report it to the police they can do this for you. The police will follow up on this as though they had gotten the report direct from you. The information you give can be as much or as little as you are willing to give. The staff at the centres have received training on handling your concerns and can provide additional support if needed.   How to attend the workshop Want more information? The workshop for deafened/hard of hearing participants will be taking place on Wednesday February 28th 2018 from 12.30 to 4pm at Amnesty International, 25 New Inn Yard, London EC2A 3EA. A loop system will be in place for hearing aid/cochlear implant users, and lipspeakers will also be provided. A number of openings are still available, so to book your place please get in touch with Geraldine O’Halloran using geraldine.o’halloran@deafplus.org or by telephone at 0207 791 0105. Be sure to let her know of any other communication support you may need.
< >