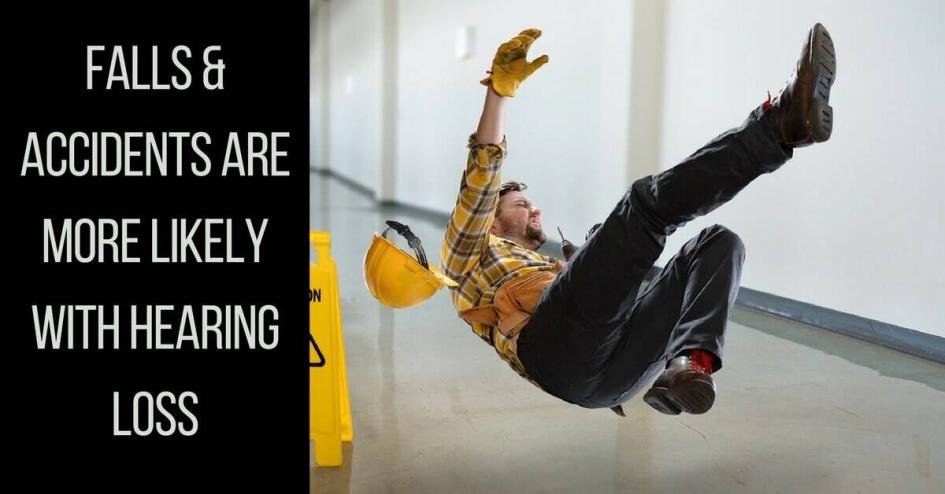 Apr 20, 2018
When we think of the negative effects of hearing loss, our minds usually turn to the difficulty of keeping up with conversations in social situations. And it's true that not feeling confident in social situations can lead to anxiety, depression and other issue. But did you know that it could also make you more accident-prone? That’s the claim made by Dr Neil Bhattacharyya, an otolaryngologist at Brigham and Women's Hospital in Boston. He recently ran a study to find out whether there was causality between hearing loss and an increase in accidents. His team looked at survey data from the U.S. National Health Interview Survey and found that 6.6 million had suffered an accidental injury. Remarkably, one in six of those in an accident rated their own hearing as ‘less than excellent or good’. The study reveals an increased rate of accidental injuries are associated with self-reported, poorer hearing adults, with leisure-related injuries being most notable among those respondents. Those with "good" or "a little trouble" hearing were at a higher risk of work-related injuries. Remarkably the danger of damage heightened the more severe the hearing loss. If a little less so with driving accidents. Those with ‘a little trouble’ in their hearing had a 60% increased chance of accidents, and those with ‘moderate trouble’ hearing, it rises further to 70%.

The researchers were bullish in their interpretation of these results. ‘Our data suggests a strong relationship between poorer hearing and accidental injury,’ according to Bhattacharyya. They also saw interest in the prevalence of leisure-related injuries among the hard of hearing, theorising that people might not feel as though they are such dangerous situations (say compared to industrial dangers at work) and might pay less attention to their surroundings. Although the study relied on self-reported data which some view as unreliable, those in the audiology industry are well aware that mild hearing loss sufferers tend to underestimate the severity of their hearing loss and take an average of 10 years to seek medical assistance. This means that their hearing loss may be even more severe than they imagine. In the UK, three quarters of adults have never had their hearing tested, a huge figure for something so important.

The researchers conclude that a portion of these accidents are very much preventable and those who are concerned should get their hearing tested and if necessary, start using a hearing aid. There are many studies which show that wearing hearing aids keeps you safer. A recent study by Eurotrak found that half the respondents said they felt safer and more independent while wearing their hearing aids. When hearing is improved, it can lead to one more easily dealing with the normal risks we face everyday living in a bustling city. This benefit is heightened with two hearing aids as you are able to notice where the sound is coming from, which makes it easier to avoid danger. Hearing aids can also correct your balance. That's according to the Washington University School of Medicine which found that perceiving sound is important to maintaining your balance. Their analysis involved testing the balance of hearing aid users, one with their hearing aids and one without. The participants exhibited improved balance while wearing their hearing aids compared to when they were without them. Finally, it is claimed by The National Institute on Aging that those with mild hearing loss were three times more likely to fall than those without hearing loss. And with each 10db increase, the risk of falling increases by 1.4%. Researchers saw that balance put a strain on the brain which led to fewer resources available to balance the body.  Wearing a hearing aid lightens the cognitive load on the brain which frees it to focus on maintaining balance, which reduces the risk of a fall. Although the study will be of concern to some people, it is comforting to know that there are things we can do today to reduce the risk of accidents in the future. And it might make people be a little more careful in their leisure activities as they are at work.

A Hearing Test Helps with Your Personal Safety

Are you concerned that you might have significant hearing loss? Have you noticed that your hearing loss is interfering with your well-being? Our team at House of Hearing is here to help. Visit is at one of our centres for a consultation and hearing test today.
< >