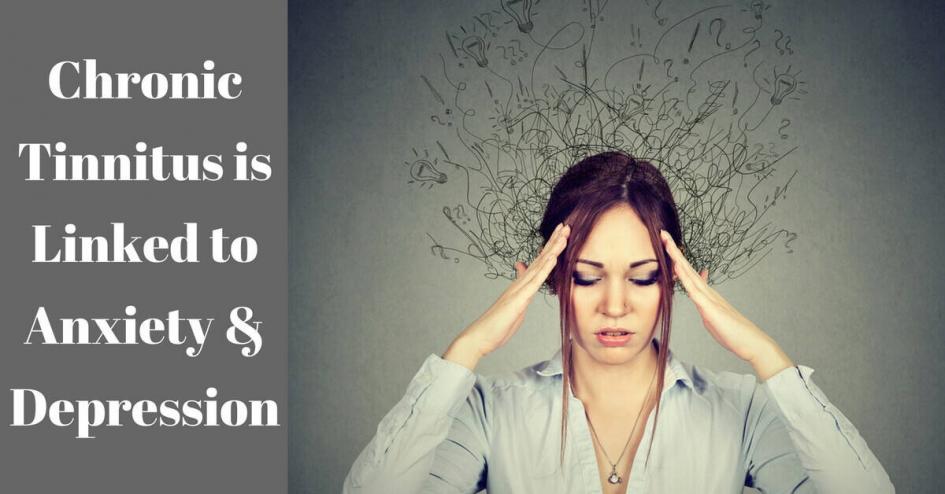 Apr 26, 2018
Many of us have had the experience of our ears “ringing” for a short while. This often follows a prolonged exposure to high volumes, such as a rock concert. But for some people, the sound of a buzzing, ringing, or whistling in their ear is constant and persistent, with the volume increasing at night and in quiet moments throughout the day. Chronic tinnitus, the experience of hearing constant sounds that come from inside your body, rather than an outside source, can be a difficult condition to cope with, leading in some cases to stress, anxiety, and depression if left untreated. An Italian research team has recently found that people who experience chronic tinnitus also have a much higher incidence of anxiety and depression compared to the general population, which is all the more reason to seek treatment for tinnitus if it becomes bothersome.

An overview of tinnitus

There are two main types of tinnitus based on potential causes.  Subjective tinnitus—which is far more common and makes up 95 percent of all cases—is when the sounds can only be heard by the person experiencing tinnitus. This type of tinnitus is strongly associated with hearing loss. When hair cells in the inner ear are damaged, the brain doesn’t receive the auditory signals that it is expecting and creates the illusion of sound to compensate for those missing signals. Ototoxic drugs, or medications that damage the nerves in the ear, can also lead to subjective tinnitus. Objective tinnitus is much rarer, and occurs when someone else—such as a doctor—can also hear the sounds that a person with tinnitus is hearing. This kind of tinnitus is commonly connected to cardiovascular issues, such as damaged blood vessels or a heart murmur. Pulsatile tinnitus, or hearing one’s heartbeat in the ear, can in rare cases signal a serious medical complication and should be medically evaluated if it occurs frequently.

Loss of hearing, which can develop gradually or quite suddenly, is the most common cause of tinnitus.  There are two main factors which can lead to auditory damage and eventually, tinnitus: exposure to loud noises (this can have prolonged, such as in the workplace; or sudden and intense such as an explosion), and the loss of hair cells in the inner ear that is considered part of the normal aging process. Pressure in the inner ear, caused by congestion or a blockage in the ear canal, can also cause short-term tinnitus, as objects such as ear wax, loose hair, or dirt can irritate the eardrum and contribute to the perception of sounds in the ear.  In these cases of congestion or blockage, treatment of tinnitus may be as simple as removing the obstruction or treating the infection.

How is it treated?

There is currently no single cure for tinnitus.  However, there are many treatment options available which can significantly improve the quality of life for those who experience chronic ringing or buzzing in the ears.  As a majority of people with tinnitus also report having difficulty hearing, most patients will benefit from a combination treatment for both their hearing loss and tinnitus, such as being fitted with a hearing aid.  Others with more severe symptoms may require acoustic therapy, such as partial or total masking of tinnitus sounds with an alternative sound, or behavioral therapy, which can help patients to disassociate tinnitus with negative behavioral reactions. Tinnitus is unique to every individual who experiences it, and as such, the best treatment option depends on a combination of factors specific to each patient.

About the Italian study

A team of six researchers at the Catholic University of Sacred Heart in Rome set out to determine the level of tinnitus-related distress in 80 chronic tinnitus sufferers, and also whether those patients suffered from psychological conditions such as anxiety and depression. In the end, the researchers uncovered a significant correlation between the discomfort of living with tinnitus, and levels of depression and anxiety. Among the study participants, the average duration of the tinnitus was six years and nine months. The majority of the patients’ audiograms revealed that they had a similar level of hearing loss in both ears, in the high frequencies (4 to 8 kHz). Only 16 percent of those in the study had normal hearing. All patients were administered the Italian versions of the Tinnitus Handicap Inventory (THI) and the Hospital Anxiety and Depression Scale (HADS). The level of tinnitus discomfort was reported as “slight” by 32.5 percent of the patients. 15 percent experienced “mild” discomfort, 12 percent stated that they had “moderate” discomfort, while 25 and 15 percent described their tinnitus-discomfort as “severe” or “catastrophic” respectively. The research team also investigated the correlation among the patient's discomfort, the severity of their hearing loss, and their age. Anxiety and depression were found to be incredibly common among the tinnitus sufferers. 45 percent of the patients had anxiety symptoms, while 26.3 percent experienced depressive symptoms. 42.5 percent of the study participants did not show any sign of anxiety or depression. The researchers concluded that tinnitus patients have a greater chance of developing anxiety-depressive disorders and a decreased quality of life. The question of why certain patients were able to better cope with their chronic tinnitus than others remains unanswered for the time being. This study, “Relationship between Tinnitus Perception and Psychiatric Discomfort”, was conducted in 2015, and published in April 2017 in the International Tinnitus Journal. Tinnitus and hearing loss can sometimes be disabling conditions, but they don’t need to be. If you or someone you love are struggling with tinnitus or hearing loss, know that there are treatment options that can improve quality of life in a dramatic way. To learn more, contact us at House of Hearing today.
< >