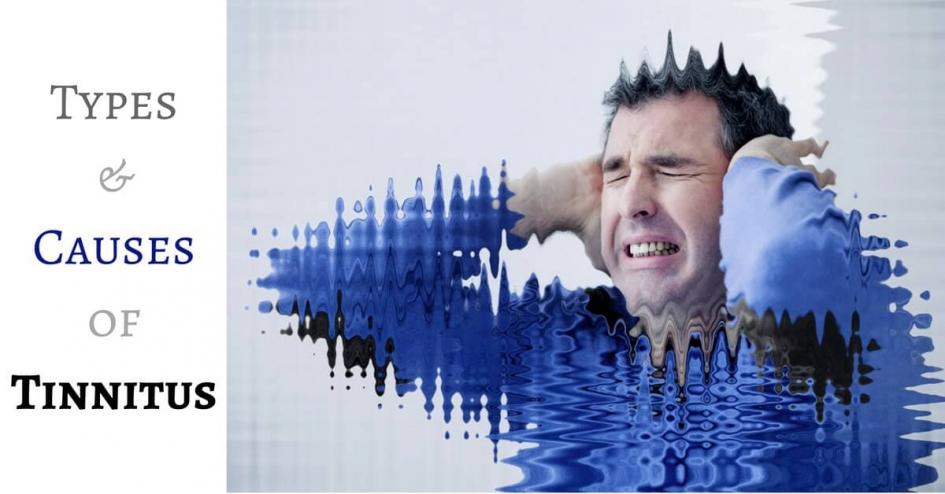 All About Tinnitus Part 2: Types & Causes of Tinnitus

All About Tinnitus Part 2

Types and Causes of Tinnitus

Tinnitus is the sensation of hearing sound when there is no external sound present. Last time, we learned about the experience of tinnitus. Around 10% of the UK population experiences some form of mild permanent tinnitus, but what causes it? In this second in a three-part series on tinnitus, we explore the types and causes of tinnitus.

Tinnitus is not an illness or disease of the ear. Although the causes of tinnitus are not fully understood, it is recognised as a symptom generated by a person’s auditory pathways. These pathways carry sound messages from the cochlea in the inner ear to the brain.

There are two kinds of tinnitus.

For most people, tinnitus is usually caused by one of these conditions:

Sound passes from your outer ear to the cochlea in the inner ear. The cochlea is a spiraled coiled tube containing sensitive hair cells that transmit auditory messages to the brain. If the inner ear is damaged, this pathway can be interrupted and stop sending information. The parts of the cochlea that still work will continue to send sound signals, which may become over-represented in the brain and lead to the sounds associated with tinnitus.

Blockages in the ear canal can cause a build-up of pressure in the middle ear, which can irritate the eardrum and lead to tinnitus. Usually this is temporary and will disappear once the blockage is removed, but in some cases it can cause permanent damage.

Earwax protects the ear canal from dirt and germs and usually passes harmlessly out of the ears. In some cases, wax can build up and block the ear canal. Similar conditions include glue ear (fluid build-up in the middle ear) and otitis media (middle ear infection) that causes a fluid build-up behind the eardrum. These conditions are common in children.

Blockages can also be caused by dirt or foreign objects, or loose hair from the ear canal.

Sinus pressure can be caused by nasal congestion resulting from a cold or flu, or by an ear or sinus infection. It can lead to abnormal pressure in the middle ear, causing temporary hearing loss and tinnitus symptoms.

These are prescribed drugs that can cause hearing loss as a side effect. In most cases, the effects are temporary and usually stop once the course of medication is completed. Some ototoxic medications, such as NSAIDs (non-steroidal anti-inflammatory drugs), certain antibiotics, cancer drugs, diuretics and quinine-based drugs can cause permanent hearing loss and tinnitus.

This is an inherited condition where the bones in the middle ear grow abnormally. It usually runs in families and can cause tinnitus and hearing loss, especially in young adults.

Other causes of tinnitus   Although these are less common, tinnitus can also be caused by:

What should I do if I think I have tinnitus?

If you’ve been hearing continuous ringing in yours ears, make an appointment with us at House of Hearing. We can check if the problem is caused by an easily treatable condition like earwax build-up or an infection. If tinnitus is diagnosed, we can offer you solutions to help you manage it.

At House of Hearing, we offer tailored tinnitus management, including tinnitus retraining therapy, hearing aids and masking technologies. We’re happy to talk through any questions or concerns you have. Give us a call on 0131 220 1220 or send us a message on our website.