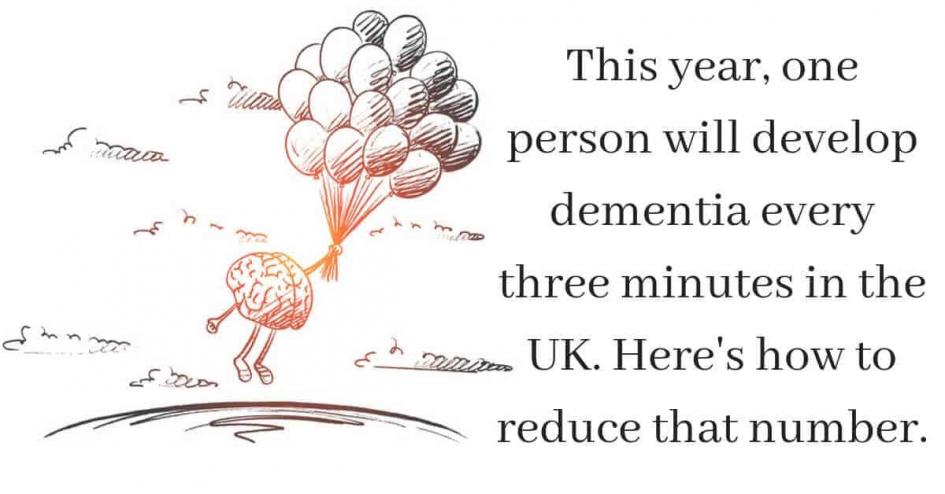 This year, one person will develop dementia every three minutes in the UK. Here's how to reduce that number.

World Alzheimer’s day takes place this 21st September. It is a chance for groups around the world to raise awareness on issues affected by dementia, and by extension, Alzheimer’s disease. The campaign was also launched to combat stigmas and myths surrounding dementia. It is clear that Alzheimer’s is a global problem that demands a global response. But how prevalent is it in the UK? One in 6 people over the age of 80 in the UK have dementia. That is a huge figure. Overall the number is 850,000, and will hit the 1 million mark by 2025. 225,000 will develop dementia this year, that’s one every three minutes. This shows that it is a growing problem that desperately needs our attention. And it’s not just the older generation that is susceptible – 40,000 people under the age of 65 also have dementia. This was shown most acutely in the case of Peter Lyttle, who was diagnosed at the age of 58. He is now working closely with the Alzheimer’s Society to campaign for increased funding and national awareness of his condition. For every person who has with dementia, the annual cost to the UK economy is over £30,000. This is a health problem that has an effect on the UK economy as a whole.

How to cut the risk of getting Alzheimer’s

Some people often think that getting Alzheimer’s is a natural part of getting old. That is simply not true and there are ways in which you can reduce the risk of getting dementia. The most common ways to cut the risk are to pay attention to commonly accepted means to reducing long-term health problems. This includes stopping smoking, limiting your alcohol intake, eating a healthy diet and doing regular exercise. But other research has suggested other factors at play. This include:

The last factor currently seems the most intriguing for recent researchers. A recent study highlighted by the BIHIMA showed a link between hearing loss and dementia in older adults. The experiment looked at 3777 people over the age of 65 over 25 years and found that those with hearing loss were more likely to be disabled and suffering from dementia. His was only a causal link, but it tells us that hearing aids might help ward off problems down the line.

How do hearing aids help? Here’s how:

Hearing aids can reduce isolation In 2015, a study by researchers from the States and Austria looked to see if hearing aids had a positive effect on perceptions of loneliness by older adults with hearing loss. They discovered a ‘significant decline’ in loneliness after only a month and a half of use They ended the study by stating that hearing aids acted as a ‘buffer against the experience of loneliness’. This is probably because hearing aid users feel more confident to meet up with friends as they feel that have a better chance of understanding their peers in noisy environments.   Hearing aid reduces sedentary lifestyle If those who are wearing hearing aids are meeting people more often, that usually means that they are more active as a result. They get out of their houses, meet up with friends, are more likely to do exercise. Most people who are using them agree that it improves their quality of life. It also aids some already active lifestyles. You can now buy hearing aids that are dust, water and shock proof. Those who like to work out at the gym will be happy to know that most hearing aids can now stream music directly from a smartphone.  You can also get hearing aids that are so discreet that no one needs to know about them while you’re out.   Hearing aid reduces depression By leading a more active and less lonely lifestyle, users are less likely to be depressed. This has more of an effect than people previously thought. A recent study by the National Institute on Deafness and Other Communication Disorders (NIDCD) showed that those with hearing loss were more than twice as likely to suffer from depression. With these three reasons, hearing aids, then, could be a surprisingly effective weapon in the fight against Alzheimer’s. To learn more and to schedule a consultation, contact us at House of Hearing.