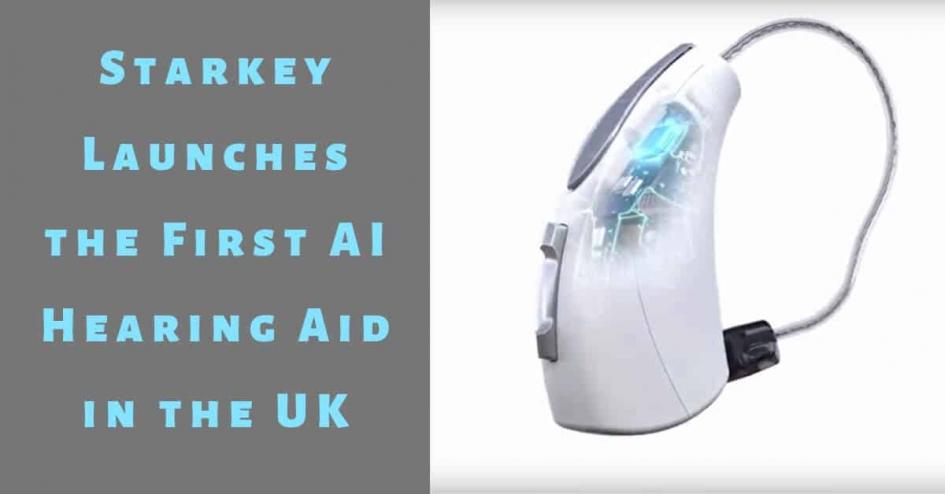 Starkey Launches the First AI Hearing Aid in the UK

Artificial Intelligence (or AI for short) has been transforming the technological landscape for the past few years, and now the next industry to benefit from its tremendous potential is the world of hearing aids. Starkey are proud to launching the first sensor-based, AI-powered hearing aid named the Livio AI. Having already been launched in the US to great success, it finally makes its way across the Atlantic to the UK. Now private practices and even the NHS are queuing up to see what the fuss is about. According to Starkey chief innovation officer and audiologist Dave Fabry, Starkey wanted to achieve three things with this hearing aid:

The device is being promoted as a ‘healthable’ device, fusing excellent sound quality with sensors and AI which monitor both body and brain health, using the help of an app.

The Thrive app tracks your body and brain

The Livio AI is used in conjunction with an app called the Thrive app, which includes two user interfaces displaying both body and brain health. Based on your activity for the day, the app offers a score out of 100 based on two scores: the Body score and Brain score. The body score is calculated through the user’s physical activity, the number of steps taken and overall movement. The criteria used to measure the Brain score include how many hours you use the hearing aid, how much social engagement you are getting and through tracking your active listening. Sensors on the hearing aid track body health, similar to consumer fitness trackers. Studies have shown that keeping a close eye on your physical activity promotes active, physical behaviour, which could have a hand in slowing down cognitive decline. This fitness tracking function is accurate up to 99% as you are unable to fake activity when it is measured from your ear, as opposed to your wrist. According to the company’s CTO Dr Achin Bhowmik:  “The ear provides far more accurate data – in fact, it’s the ideal spot for reliable tracking, and Livio AI is the first ever device to take advantage of that.” The AI algorithms, unprecedented in a hearing healthcare device, are used to track brain health. It records how often users wear their hearing aids, and how the device is used in different environments.

Users can also set ‘memories’ of commonly used environments where they might encounter difficult hearing, such as such as a restaurant, the office or in the car. This enables the Livio AI to switch between personalized settings automatically, using speed detection and location geotagging. Are you travelling at more than 10 miles an hour? Unless you are Usain Bolt, you are probably in the car and the Livio AI will detect that and switch to your optimized ‘car’ settings.

The Livio AI hearing aid also has a fall alert function which detects when the user has fallen. This can be crucial if the wearer is immobilised and requires immediate medical attention.  This technology is so advanced that it can distinguish between somebody falling over and somebody simply dropping the hearing aid on the ground. At the point of somebody falling over, the device starts a 60- second countdown and if the user fails to get back up, the device sends an automatic alert the three contacts assigned by the wearer in the Thrive app. The device will then inform the user that an alert has been sent. For those who have been alerted, the Livio AI helpfully provides the contact with information on the quickest route to the wearer based on live traffic information.

A final notable feature is instant translation. As part of the ‘gateway to information’ principle, users can also use the app to translate phrases into 27 languages discreetly and directly into the wearer’s ear. Fabry notes that other languages can be hard to pick up for those hearing loss therefore this new feature will give the user more confidence when travelling further afield. Are you as excited as we are about the Starkey Livio AI? Come and hear it in action today at House of Hearing!