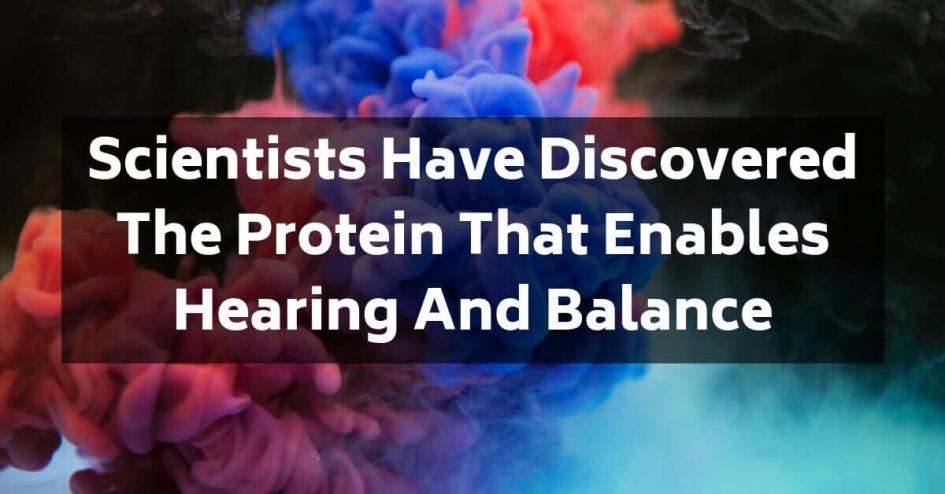 Scientists Have Discovered the Protein That Enables Hearing and Balance

Sep 24, 2018
How much do most of us know about the way our hearing works? We know that sound gets funnelled down the ear, through the eardrum and to the inner ear. We know that our ears ring after loud concerts, and that a burst eardrum is definitely something you want to avoid. Beyond that, doctors, researchers, and hearing healthcare professionals know that hearing is actually made possible by a collection of delicate hair cells within the inner ear. These hair cells detect both sound and movement, and convert these stimuli into electrical signals which can be processed by the brain. The brain, in fact, does just as much work as the ears do when it comes to hearing. But now scientists at Harvard Medical School have deepened our understanding of the complex process of hearing with a new discovery. A specific protein called TMC1 is primarily responsible for converting sound and head motion into electrical signals. In other words, this protein is the key to hearing, and when it is defective, hearing becomes impossible. Their findings were published last month in the scientific journal Neuron.

How scientists narrowed it down to one vital protein

Jeffrey Holt, a Harvard Medical School professor of otolaryngology and neurology and a senior author on the paper, first presented a hypothesis on TMC1 in 2011, and had been working on identifying its exact function for several years before making a breakthrough. Finding the definitive evidence that TMC1 was indeed critical to hearing--and what role it played--proved to be a painstaking process, in part because the mechanisms of hearing are located in a hard-to-access location within the inner ear. "The search for this sensor protein has led to numerous dead ends, but we think this discovery ends the quest," said David Corey, another senior author on the new paper. In the new study, Holt, Corey and the rest of their team discovered that at the tip of each hair cell are two TMC1 proteins that open and close, like pores, in response to sound. By using computer-based predictions based on other, similar protein structures, the researchers were then able to produce a model of what TMC1 most likely looks like. Using this model of the protein, they pinpointed 17 amino acids (protein building blocks) that looked essential to the function of the protein. Then, one at a time, they changed each of these amino acids in the TMC1 protein in mice – replacing each one with a different amino acid. They then examined how each substitution affected the flow of charged ions through the pore in response to sound signals. Sound complicated yet? "Hair cells, like car engines, are complex machines that need to be studied as they are running," Corey commented. "You can't figure out how a piston or a spark plug works by itself. You have to modify the part, put it back in the engine and then gauge its effect on performance." Finally, after 17 substitutions, 11 were observed to alter the flow of ions through the pore. Of these, only 5 had a very strong effect, and were capable of reducing the flow by up to 80 percent, while the substitution of one amino acid in particular – an asparagine located at position 447 in the protein – was able to block the flow of calcium ions completely. In short, this small cluster of amino acids plays a vital role in transforming sound waves to nerve signals.

“The gatekeeper of hearing”

The TMC1 gene is also present in the animal kingdom, and now scientists believe they know why this important gene has been passed on and preserved throughout the millennia. "The fact that evolution has conserved this protein across all vertebrate species underscores how critical it is for survival," Holt said. He believes the results of the study "yield definitive proof that TMC1 is the critical molecular sensor that converts sound and motion into electrical signals the brain can understand." It is, according to Holt and his team, “the gatekeeper of hearing”.

What this discovery means for future research

About half of all cases of hearing loss are the result of genetics, and one in 1,000 newborns are born deaf or with partial hearing. Prior to this study, researchers had linked mutations in TMC1 to hereditary hearing loss, but it was unknown, until know, just how vital a role TMC1 plays. "To design optimal treatments for hearing loss, we need to know the molecules and their structures where disease-causing malfunctions arise, and our findings are an important step in that direction," Holt said of his team’s recent findings. Now that researchers know to investigate this particular protein to learn more about the sound conversion process, therapies for hereditary hearing loss caused by the TMC1 gene might not be too far behind.

For personalized help with your hearing loss, contact House of Hearing

If you have been struggling with hearing loss, there is no reason to delay treatment. To find out about the ways hearing aids can improve your life, contact us at House of Hearing today.
< >