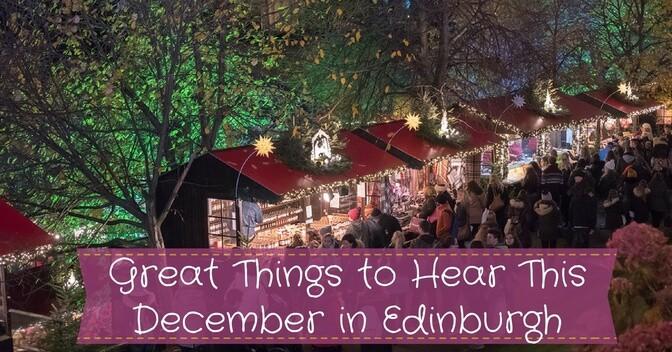 Great things to hear this December in Edinburgh

Dec 06, 2017
Edinburgh’s Christmas season features one of the most popular Christmas celebrations in the UK and 2017 promises to be the most comprehensive and spectacular to date. It almost seems like December is one long party in the city, with thousands pouring in from around the world to enjoy the festivities. But what is in store for the music lover?

If you’re interested in carol singing this December, then look no further. The Edinburgh Telephone Choir will perform a series of singalong carols and choral recitals at the Greyfriars Kirk. What better way to get into the festive spirit than singing Christmas songs in one of the oldest surviving buildings within the Old Town of Edinburgh. All funds raised from this concert will go towards the charity ‘Feed the Minds’ which supports education in some of the world poorest countries.   2) Annasach's Christmas Ceilidh A ceilidh is the Scottish name for a party with Scottish folk music and dancing. And on the 16th December, the Annasach Ceilidh band has got everything you need to get involved. Come down to The Counting House in Edinburgh’s old town for a knees-up, Auld Reekie-style! Music starts at 8pm with your very own dance caller Tricia. She will demonstrate all the dances so you don’t have to be an expert to join in the fun. After a round of dancing, you will sit down to stovies, a traditional Scottish dish of meat and potatoes, washed down by a complementary whisky. The music and dancing will then continue until late.

If you’ve ever been to St. John’s church, the venue needs no introduction. It is also the perfect setting for an evening of brass music from the Edinburgh Brass Band. On the 16th December they return for their annual concert at this historic venue. Expect some carols, one or two old favourites and also a few surprises.

Do you want something a little more family-friendly this Christmas? How about a silent disco with the little ones? Following the massive success of the first-ever silent disco at Edinburgh Fringe 2017, the organisers are coming to Festival Square with another night of musical mayhem. There will be two DJs, one of the kids and one for the oldies. The kids DJ will play chart-topping pop classics and the adults DJ will be playing retro classics. There promises to be ‘Hip-hop vs hip replacements… Breakdancing vs leg-breaking dad dancing. Air guitars and hairbrush anthems’. Competitions and party games will keep things lively and fun.

Running throughout December, La clique Noel is ‘sexy and saucy; glitzy and glittery, naughty and very nice.' According to the Edinburgh guide. It’s a special seasonal edition of the show that was first presented during the Edinburgh Fringe festival in 2004. Since then it has captivated audiences in many different countries around the world. Featuring a live band and a cast of provocative, genre-bending artists, the show blends burlesque, cabaret, magic, variety and comedy into one stunning performance. This Christmas, celebrate in irreverent style with La Clique Noel!

A bottle of wine and Patsy Cline

The title says it all, what more could you want? This is a smash-hit musical which pays homage to the life and music of Patsy Cline. Born in Virginia, Patsy is one of the most influential female singers the world has ever known. Star Gail Watson will perform pitch-perfect renditions of all of Patsy’s greatest hits including Crazy, Sweet Dreams, Walking After Midnight and many, many more! This sell-out show is not to be missed for fans of theatre and music. What are you waiting for?

This is one of the most famous New Year’s Eve parties in the UK. Over two days, say goodbye to 2017 with a stellar programme of events, featuring a torchlight procession, a kids’ party and a street party. But the music lovers will want to join the concert in the gardens at 8pm. The festival headliner this year is Rag’n’Bone Man. He has won two BRIT Awards and has had numerous sold-out shows around the UK and Europe. Support comes from Declan McKenna and Edinburgh's own Nina Nesbitt. The concert will be followed by the most spectacular firework display you’ll see this year. With the Edinburgh castle in the background, there really is no better way to welcome in the New Year.

Looking to reconnect with the sounds of the holiday season? If you believe you are experiencing changes in your hearing abilities, visit us at House of Hearing for a consultation and hearing test today.
< >