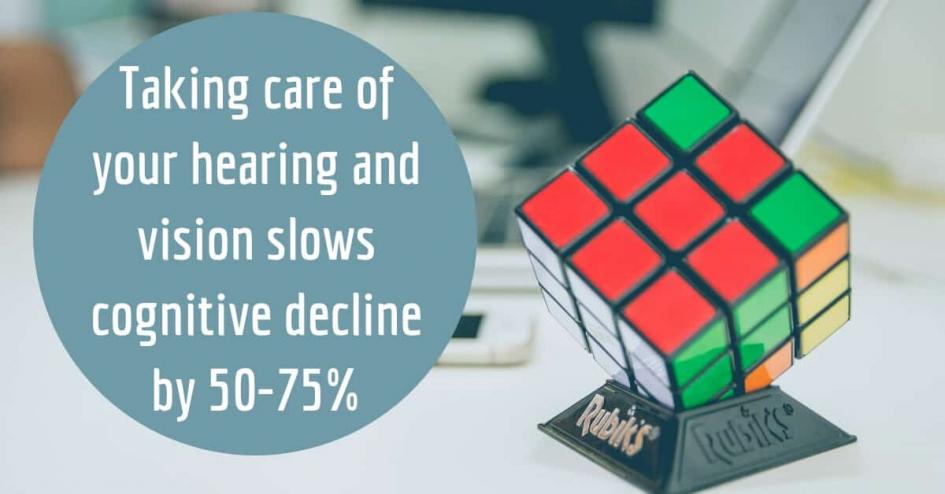 Taking care of your eyes and ears may be the key to protecting your brain function, according to a joint study from the University of Michigan in the U.S. and the University of Manchester. They found that hearing aids and cataract surgery have a strong correlation with reduced rates of cognitive decline associated with getting older. By wearing hearing aids, the amount of cognitive decline was lowered by 75 percent. Spearheaded by Dr Piers Dawes and Dr Asri Maharani, a study was conducted on 2000 Americans as part of a larger study on older Americans by the University of Michigan. They measured the hearing of the participants once every two years for 18 years. Cognition was assessed through word memory tests and testing this ability before and after the participants acquired hearing aids. The study found that although the hearing aids did not stop or reverse cognitive decline, it slowed the rate of its development by 75 percent more than in those who did not wear hearing aids. As for the eyes, having cataract surgery can reduce the rate of decline by half. After the study, Dr Piers Dawes remarked: "These studies underline just how important it is to overcome the barriers which deny people from accessing hearing and visual aids. There are two main explanations for why hearing loss might lead to cognitive decline: Social isolation and an increase in cognitive load.

"It's not really certain why hearing and visual problems have an impact on cognitive decline, but I'd guess that isolation, stigma and the resultant lack of physical activity that are linked to hearing and vision problems might have something to do with it.” - Dr Piers Dawes. This social isolation is a vicious cycle that promotes loneliness and fuels further cognitive decline. People who have hearing problems find it difficult to hear in noisy environments, which makes them less likely to want to meet their friends at social gatherings, commonly held in buzzing atmospheres in bars, pubs, restaurants and cafes. As they go out less, they do less exercise and become more isolated from their peers. This was confirmed in another study by Hélène Amieva published in the American Geriatrics society, looking at a group of 4000 over 25 years. People who didn’t use hearing aids saw their cognitive decline sped up compared with those with hearing aids. The scientists reasoned that the role hearing aids played in keeping its users socially active was a large factor in reducing cognitive decline.  Hearing aids improve mood, increase social interactions and make the user more likely to participate in cognitively demanding activities, all of which can have a positive effect.

Hearing is done by the brain just as much as the ears. So, when we have hearing loss, connections in the brain are reorganised. The sound is not always accurately processed and made sense of. This leads to some poorer results in cognitive tests, as demonstrated in the study featured in this article. Other studies showed that those with hearing loss had less grey matter in the auditory cortex, which is a part of the brain essential for speech comprehension. In noisy places, people with hearing loss may find it more difficult to process what their friend is saying. This reorganises activity in the brain to account for this lack of information, and increases the cognitive load as a result. You put in a lot of effort to understand speech, which diverts resources away from your memory. This could help explain why those without hearing aids performed more poorly in memory tests in the featured study. The study is strong evidence of the need to wearing hearing aids, but there are barriers to overcome. The number of people in Britain with hearing problems will increase to 40 percent by 2035 as the population ages, according to the charity Action on Hearing Loss. However, only £1.11 is spent per person on someone with hearing loss in this country. To put this into perspective, those with sight loss currently get ten times more funding. The researchers call for hearing and sight loss screening for all older adults. This might be the best solution for helping lessen cognitive decline in older communities across the UK.

Contact House of Hearing for a comprehensive hearing evaluation

If you have noticed changes in your hearing, it is important to have your hearing examined as soon as possible. The earlier your hearing loss is detected and treated, the better your outcome will be with hearing aids. To protect your cognitive health and improve your quality of life, take the first step of scheduling your hearing evaluation today.