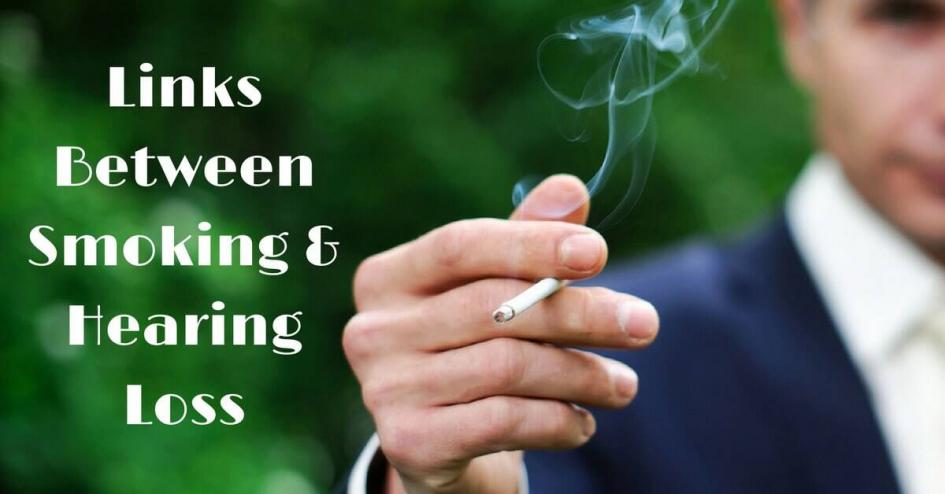 Links Between Smoking and Hearing Loss

The detrimental impacts of smoking have been well-known for a long time: it can negatively affect the heart, brain, lungs, circulation and stomach, to name a few issues. It is also the world’s leading cause of preventable deaths and poor health more generally. In Scotland alone, tobacco use is associated with over 10,000 deaths per year. It also costs the NHS about £2 million per year. A recent study from the University of Manchester suggests that there may be yet another, lesser known side effect of smoking: hearing loss.

The impacts of smoking on hearing health

After comparing the results of nearly 165,000 adults aged 40 to 69 years of age, researchers from University of Manchester concluded that current smokers are 15 per cent more likely to suffer from hearing loss later in life. The adults that participated in the study took hearing tests between 2007 and 2010 after joining a national project to improve health called UK Biobank. These results indicated a link between smoking and hearing loss – including passive smoking. While current smokers were 15% more likely to develop hearing loss, ex-smokers had a slightly reduced risk of hearing loss. Researchers think this may be because often, when people give up smoking, they also adopt a healthier lifestyle overall. Adopting a healthier lifestyle may be important in terms of overall hearing health, as healthy eating – and certain vitamins  – have been shown to provide protective effects for the ears. Good cardiovascular health, supported by a regular exercise regimen, is also cited  as a way to protect against hearing loss.

Passive smokers: Even more at risk of hearing loss?

Passive smokers, or people who inhale other people’s smoke, were also deemed to be at risk. The study indicated that exposure to second-hand smoke could increase the chance of developing hearing loss by up to 28%! That’s definitely one reason to avoid the smoking section. This means that the risk for passive smokers is actually higher than that for current smokers. It’s safe to say, that is fairly alarming! One reason may be due to the limitations of the study itself: passive smokers were only compared with non-smokers, whereas current smokers were compared with both complete non-smokers and passive smokers as well. However, researchers admitted that these limitations in studying passive smoking means that the association between smoking and hearing loss may actually be underestimated by the study.

The reasons why smoking may cause hearing loss later in life

Although the study was able to identify a link between hearing loss and smoking, further research is required to work out the actual reasons why smoking impacts upon hearing health. Researchers suspect it may have something to do with the toxins that are found in tobacco smoke, but it may also be the result of smoking-related cardiovascular diseases that then lead to a change in hearing perception. The actual reason behind smoking’s impacts on hearing health are still unknown, but what is clear is that there is a link between smoking and hearing loss, particularly later in life.

Lifestyle choices and the impacts on hearing health

Dr Piers Dawes, from the Centre for Human Communication and Deafness at The University of Manchester, led the research. He emphasised that given the number of people in the UK (and worldwide) who smoke, the study’s findings could mean that “smoking may represent a significant cause of hearing loss worldwide”. Clearly, it’s about lifestyle choices and how these choices may impact upon your health later in life. Once inner ear cells are damaged, they cannot be repaired, so it is essential to take preventive measures early on to protect your hearing health. As Dr Ralph Holme, the Head of Biomedical Research at Action of Hearing Loss commented, “Hearing loss is often viewed as an inevitable consequence of against, but as the research… shows, this may not always be the case. Giving up smoking and protecting your ears from loud noise are two practical steps people can take today to prevent hearing loss later in life.” If you’ve been looking for another reason to quit smoking and get healthy, it’s safe to say this is a good one! The full study is available here (https://www.ncbi.nlm.nih.gov/pmc/articles/PMC4141428/), free of charge.

House of Hearing offers hearing care at four centres in Edinburgh, Galashiels, Perth, and St Andrews. Call us on 0131 220 1220 for more information.