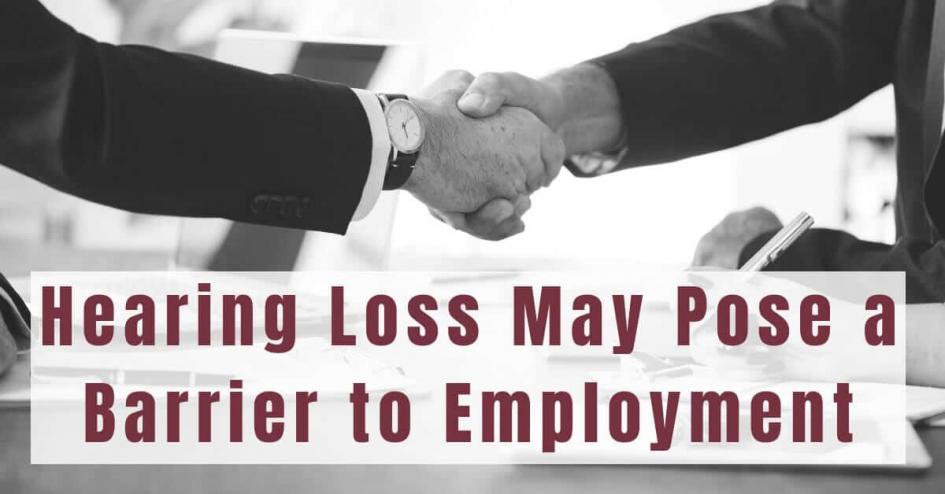 Hearing Loss May Pose a Barrier to Employment

Dec 01, 2018
Compared to a study two years ago, people with hearing loss still face difficulties when applying for jobs and while working, according to a charity. The charity Action On Hearing Loss (AOHL) interviewed more than 1000 people and found that despite the Equality Act of 2010, the majority had experiences of being treated unfairly at work because of their hearing loss. This is significant when you consider that there are five million people in the UK of working age who also live with hearing loss or are deaf.

One of the first barriers is getting a job in the first place. According to a separate study by AOHL in 2016, 72% of deaf people received no support when looking for a job. Then there is another mountain to climb once you have received the interview. This was confirmed by Tasha Henderson, who has had hearing loss since she was born. "I've had someone's body language change as soon as I've told them about my hearing loss, for example I was asked about medical conditions during an interview and when I said it, I knew right away I would not get the job because of the person's body language," she said. There are also problems with accessibility, as discovered by Justin Smith, International Programme Manager at SignHealth, a charity dedicated to enabling deaf people to get equal access to healthcare and health information, and one of the biggest employers of deaf people in the UK. Justin was born Deaf into a Deaf family and is a sign language user. He found that there was a lack of diverse methods to reach out to employees. “There are no alternative deaf-friendly options like an email address or the opportunity to speak face-to-face as well. Similarly, there are numerous job positions that require the applicant to be able to use a telephone. As a Deaf person, I can use a telephone, with an interpreter, adaptations and technology – it isn’t impossible, yet so many deaf people are rejected on that small technicality.” The 2018 study discovered that 44 percent didn’t let their potential employers know of their condition when applying for the role, as they were concerned that companies wouldn’t see them as able to fulfil the demands of the role. This was also something that Justin Smith faced, and he discovered immediate benefits as soon as he made his condition less clear in his CV: “An experiment to rewrite my CV to remove any references or clues about my deafness and to appear as if I was a hearing person who just happens to know sign language, resulted in immediate success with getting through to the second stage/interviews.”

The 2016 survey also found that of those who experienced discrimination at work, 62 percent was the result of fellow colleagues. Indeed, The Equality Commission said it received 63 enquiries related to workplace discrimination on grounds of disability over the last three years. AOHL said employers need to make changes if they see workplace discrimination. "It's inconceivable for anyone with another disability to be mocked at work, and that still happens for people with hearing loss or deafness," Claire Lavery, from the AOHL, said.

Changes to workplace can also help

There are a few things employers can do to make the workplace friendlier to those with hearing loss. Many are concerned about the potential cost but there are also cost-neutral ways to make offices more inclusive. For example, you could incorporate a ‘text first’ policy, starting with email and text messages instead phone calls or face-to-face communication. This makes it easier to communicate and will enable all employees to understand everything to do their job. You could also position hearing-aid wearers to a place away from machines that might emit a lot of noise, as this can interfere with their hearing ability. Corners of the office space are best for this, as well as a place against a window. This enables the employee to clearly see the face of those they are speaking to opposite their desk, which will aid lip reading. “It’s imperative that employers change their attitudes towards both employing people who are deaf or hard of hearing and to supporting those already in the workforce who may have, or might develop, a hearing loss.” According to Rob Burley, head of public affairs and campaigns at Action on Hearing Loss. This could have huge benefits for the economy. in a recent study in the US, lost wages that result from hearing loss cost the American economy over $150 billion. The benefits of inclusive recruitment and employment practices here could go a long way to mitigating losses like these here in the UK.

Learn more about hearing aids with House of Hearing

There is no doubt that working with hearing loss presents additional challenges, but the right hearing aids can help. To find out more about how hearing aids can improve your life, make an appointment with House of Hearing today.
< >